Sometime during my Freshman year in High School, I found a magazine on the dining table. The cover art suggested a science fiction theme, but the contents definitely had something to do with electronics. The title was very weird and confusing to me: Byte. The subtitle was not that helpful either: The Small Systems Journal. What kind of small systems are they talking about? As I tried to read the articles and analyze the ads, I began to realize that this magazine was about small computers. Up to that moment, my concept of a computer was something that cost millions of dollars and filled several rooms. When I was six, my dad had taken me to work on a Saturday, and let me go with him into the data processing center, full of cabinets roaring with forced cooling air, reel-to-reel tape drives, washing-machine looking disk units, punched card readers, all controlled from a large panel of switches and blinking lights. This Byte magazine had pictures of machines costing around a thousand dollars that could fit on a table. It now appeared to possible for someone to actually have a computer in their home. 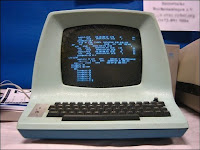 This was mind-blowing for me; science-fiction was becoming reality. I pored over the magazine trying to understand what these machines were, what they could do, and dreamed about how I could possibly get one. It turned out that a friend of my dad's had given him the magazine, and more issues started to arrive. Some of the articles reviewed hardware or showed how to build circuits, but other articles talked about programs. Some of these programs were in machine and assembly language and were completely incomprehensible to me, but some were in a language called BASIC, and I could figure out some of what they did. Not long after that, the first computer store in Dallas opened up. My dad took me there and I got to see some of these machines in person. Some of them had boxes with switches and lights on the front, others just had a power and reset button. Some had keyboards and little TV monitors connected to them. I could press the keys and see the letters appear on the screen. On one of our visits there, I tried typing in a little program...
10 PRINT "GREG"
20 GOTO 10
RUN
... and my name went racing up the screen. What a thrill! 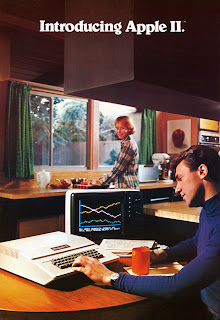 Thoughts of computers filled my mind. A company called Commodore came out with a computer called the PET which you could buy for $600, and it included everything you needed to write BASIC programs. My goal was to save up enough money to buy a PET, which seemed achievable with a lot of work. I did not consider the dream machine, the Apple II, which at over $1000 seemed unobtainable. In the meantime, I heard that my High School had a course called Computer Math that taught BASIC programming, so I signed up to take it my Sophomore year. I didn't think it would be a very good course, but at least I would get to program a computer.
That summer, my dad surprised me and delighted me to no end by bringing home an Apple II with 16K of RAM! I probably spent every spare hour I had that summer on the computer, typing in programs out of magazines, playing little games, and coming up with my own programs.
When it came time for me to take the Computer Math class, I had already learned on my own most what would be taught in the class. There was one other kid in the class, Chad, who also knew a lot about computers, and we became friends. Chad and I did well in the class, but Chad had stories of a kid named Mike who had taken the class earlier and was quite a computer wiz. Later that year, our teacher took Mike, Chad, and myself up to North Texas State University (now UNT) for a programming contest. This was my first time to spend any time with Mike, and although he was kind of strange, he was clearly very smart, and I admired him. We did not win the contest, but we had a good time. On the drive back, Chad and Mike put a tape in the car stereo, and a very strange song began to play. It seemed to have a religious theme, but it was not like any religious song I had ever heard. I couldn't tell if it was serious, or making fun of religion. I now know it was Larry Norman singing Moses in the Wilderness, and this song was a kind of sign of things to come.
Posted by Greg Graham at 7:09 PM 5 comments:

Although the presence of the Force in Star Wars opened my mind to the possibility of something like the supernatural, I did not immediately turn to traditional religion. The Force was manifested in Star Wars through mind control, telekinesis, and skill in fighting; these are not things you find in most traditional religions. However, I began to think about the legends of wizards and witches from the Middle Ages, and I wondered if there was some kind of reality behind those legends. 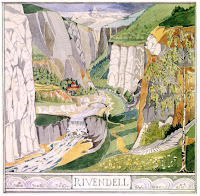 In those days, you could not walk into a book store and find books on witchcraft or Wicca. If such things had been available to me then, I might have been tempted to actually try it. However, all I got into was Fantasy genre fiction and the Dungeons and Dragons game. Although I read a few different Fantasy series, what made a huge impression on me was The Hobbit and The Lord of the Rings by J.R.R. Tolkien. I was amazed by the detail and the scope of the imaginary world that Tolkien created, but I think there were deeper things that affected me. I was drawn to the beauty, goodness, and heroism in these stories that was stronger than anything I had encountered before.

I think my new interest in Tolkien improved my relationship with my friend, Doug, who had become religious a couple of years earlier. He was a Tolkien fan, and now we had this in common. This relationship would grow in importance through the rest of High School, and lasts even to this day.
Posted by Greg Graham at 8:17 PM No comments: