God’s Word is an Inexhaustible Spring of Life

I am taking a break to share a quote I read today from St. Ephrem of Syria, who lived in the 4th century. Even though I just discovered this quote, it describes what I began to experience as a young adult as I began to study the Bible. I remember having discussions with friends in college about how we would come back to a passage that we had read in the past, and see new things we hadn't previously noticed. I can testify now 30 years later that my experience of the Bible continues to be as a spring of life that never runs dry.

Lord, who can comprehend even one of your words? We lose more of it than we grasp, like those who drink from a living spring. For God’s word offers different facets according to the capacity of the listener, and the Lord has portrayed his message in many colors, so that whoever gazes upon it can see in it what suits him. Within it he has buried manifold treasures, so that each of us might grow rich in seeking them out.

The word of God is a tree of life that offers us blessed fruit from each of its branches. It is like that rock which was struck open in the wilderness, from which all were offered spiritual drink. As the Apostle says: They ate spiritual food and they drank spiritual drink.

And so whenever anyone discovers some part of the treasure, he should not think that he has exhausted God’s word. Instead he should feel that this is all that he was able to find of the wealth contained in it. Nor should he say that the word is weak and sterile or look down on it simply because this portion was all that he happened to find. But precisely because he could not capture it all he should give thanks for its riches.

Be glad then that you are overwhelmed, and do not be saddened because he has overcome you. A thirsty man is happy when he is drinking, and he is not depressed because he cannot exhaust the spring. So let this spring quench your thirst, and not your thirst the spring. For if you can satisfy your thirst without exhausting the spring, then when you thirst again you can drink from it once more; but if when your thirst is sated the spring is also dried up, then your victory would turn to your own harm.

Be thankful then for what you have received, and do not be saddened at all that such an abundance still remains. What you have received and attained is your present share, while what is left will be your heritage. For what you could not take at one time because of your weakness, you will be able to grasp at another if you only persevere. So do not foolishly try to drain in one draught what cannot be consumed all at once, and do not cease out of faintheartedness from what you will be able to absorb as time goes on.

I took Physics in my Junior year in High School. Doug, Chad, and Mike were all in that class. (Toni, who 11 years later would be my wife, was also in that class. More about that story will come later.) I noticed that they would bring Bibles to school and talk about religion, but they were also very intelligent and did well in science. They made me think that it could be possible to be intelligent, rational, and religious at the same time. Their example combined with my growing disillusionment with the unfulfilled promises of modern progress made me think I should give religion a chance. I decided that I would conduct a systematic study of the major world religions to see if any of them made sense. I believed that my Christian heritage was just something I happened to be born into, so there was no reason to believe that Christianity should hold any priority over any other religion. Therefore I should give them all a chance before making any kind of commitment. 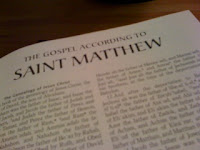 Of course, I couldn't just Google Hinduism and bring up a Wikipedia article in the comfort of my bedroom. Such research in that day would mean a lot of time in the library just to get started. I had not made any progress towards my goal when I found myself in some conversations with these guys about the Bible. What made an impression on me was when they showed me how Jesus fulfilled so many Old Testament prophecies that had been written centuries before he was born. In the process of seeing these prophecies and their fulfillment, I had a kind of epiphany such that I knew that the Bible had to be a supernatural book. I suddenly had confidence that the Bible was a message from God, and losing all interest in other religions, all I wanted to do was to know and understand what it said.

About this same time, Doug, Chad, and Mike took me to a Christian youth meeting where they gave a simple gospel presentation that focused on the fact that Jesus Christ took all of our sins upon himself on the cross. We needed to trust in his work on the cross in order to receive forgiveness of our sins and eternal salvation. I wasn't sure if I had done that before or not, so I made a renewed effort at faith in Christ.

I began to immerse myself in anything Bible or Christian related. I wanted to make sure I had the right kind of Bible, so I ended up buying several. I would try to watch Christian television shows, but even in my enthusiasm, I couldn't take most of them. I did start to get into prophecy related teaching that predicted that Jesus was returning soon. I got into Christian music, including Michael Omartian, Keith Green, John Michael and Terry Talbot, 2nd Chapter of Acts and Daniel Amos. When I found out that there was a series of fantasy books with a Christian theme called The Chronicles of Narnia, I immediately started reading them. The Narnia books were very helpful because they worked on my imagination. As I stated before, growing up I had not found the person of Jesus to be very appealing. Now I believed that he was the Son of God and our Savior, but I still had trouble looking up to him as a person. However, in Narnia, Jesus was in the form of the lion Aslan. The way that C. S. Lewis portrayed Aslan was very appealing to me, and over time I was able to transfer the way I felt about Aslan to my conception of Jesus.

I continued to go to the same Presbyterian church our family had attended since I was 10. I got involved in the choir and was more interested in Sunday school and youth group, but my school friends went to a Bible Church, and I believed that they were closer to the Biblical truth. I visited their church whenever I got the chance.

As we neared graduation, we were all making plans for college. Mike was going to a Bible college, but I was going to Texas A&M. There was some concern that by going off to a big secular school, I would be endangering my new faith, so I prayed that God would protect me.
Posted by Greg Graham at 9:42 PM 1 comment: