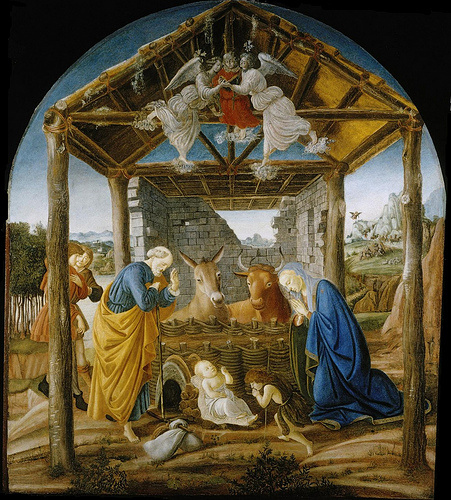 I have great admiration for Fr. Denis Farkasfalvy, O. Cist., the Abbot Emeritus of Our Lady of Dallas, Cistercian Abbey. I took two theology classes from him at the University of Dallas, and now I wish I had taken more. The Abbey puts out a newsletter from time to time, and here is an excerpt from an article Fr. Denis wrote in the latest issue.


If I want to speak bluntly, Advent celebrates God’s “Love affair” with mankind, which a human being understands only as a weakness when he or she has an irrational experience by falling in love and feels caught by storms of emotional instability. God, however, is the absolute crystal clear intellect and yet declares himself vulnerable to the human response (or lack or response) of love. He goes out of his way in order to lead the human being on a path of conversion, loving response and ultimately finding fulfillment in a mutual embrace with God.
The Incarnation is about God becoming a human being without diminishing his divine identity. Cistercian spirituality, formulated most clearly in Saint Bernard’s writings, makes statements like the following: “the Creator and Lord of the Universe came to Man, for the sake of Man, came as a Man” (Sermon in Advent 3). “Man” is so strongly and explicitly put into the center of this statement that you would think it is a quotation from a Humanist author of the 15th century, the peak of the Renaissance era, and yet, the evidence is clear that this comes from the first half of the 12th century, from that “God-centered” period of the Middle Ages. Is Bernard anticipating some later development of a “Christian Humanism” or rather providing us with a fully concentrated sample of that thinking, which was set in motion much earlier by the Church Fathers (Saint Ambrose, Saint Augustine, Gregory the Great and others) who saw that the Incarnation promotes the human being to a level of unspeakably elevated dignity.
One of Bernard’s favorite ancient sources, Origen of Alexandria from the 3rd century, had already stated this with exceptional force and Bernard did his best to express it in the language of a sweet and ornate prose of the high Middle Ages as the motto of Christmas: “God became man so that man could become God.”

I encountered this quote from Origen years ago as I was discovering the Church Fathers and learning about the Orthodox Church. At first, the phrase "...man should become God" sounded blasphemous to me. Although it's true that such an expression can be understood wrongly, I like it now because it is shocking and causes us to think. If you prefer New Testament language, look at the beginning of 2 Peter, which says that through the power of God we can "become partakers of the divine nature" (2 Peter 1:4). Saint John also says, "Beloved, we are God’s children now; it does not yet appear what we shall be, but we know that when he appears we shall be like him, for we shall see him as he is" (1 John 3:2).

What all this means is that in the little baby in Bethlehem, God has joined himself to the human race so that humans can be lifted up into fellowship with God. We do not become God by nature; we remain human beings. However, by the grace of God, those of us who choose to follow Jesus will be made like Jesus. We are made his brothers and sisters, inheriting with him the infinite bounty of God. This is why we celebrate the little baby in the manger. I hope you have had a blessed Advent and will have a Merry Christmas!
Posted by Greg Graham at 12:56 PM No comments: