Demons in the Old Testament 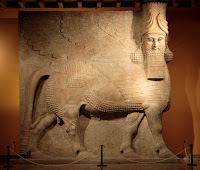 There are two things I really like about these posts. First of all, the topic of demons is an interesting one, which helps make the articles engaging to those who might not have interests in other theological topics. More importantly, though, is that he provides a great illustration of how doctrines develop over time. So many people today want to treat the Bible as a static manual that someone sat down and wrote to explain a system of religious belief. They act as if any reference to a topic found in the Bible, no matter where, should be taken at face value as a definitive statement about the topic without regard to its historical context.

It is true that we believe that in one sense, through the process of divine inspiration, the Bible has a single author who provides a unity to the text not found in any other collection of writings. Even so, God chose to work through human authors, limiting himself to their cultural perspective and knowledge of the world. Therefore, we see the understanding of the nature of demons is probably influenced by exposure to other belief systems which provide a vocabulary for biblical writers to use to express in a concrete way what was only vaguely understood before.
Posted by Greg Graham at 10:19 AM No comments: