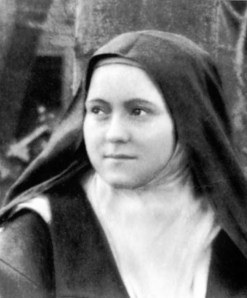 One of my favorite saints is St. Thérèse of Lisieux. She lived in an atmosphere of rigorous Christianity that could be very discouraging for those who don't have a strong disposition. However, she saw that it was her weakness that could actually draw her closer to Christ as she depended on him to make her into the saint she was to become.

One thing that I like that she said was when she was overwhelmed with the idea of climbing the difficult mountain of sanctity, she asked God to provide her an elevator to get to the top. She saw herself as a child, and so she would ask Jesus to pick her up because she could not reach him otherwise due to her small size.

Another message of hers that really speaks to me is rather than attempting to do great things for God, she says to do small things with great love. I think this is very important because when attempting great things, pride often gets in the way. If the focus is on the love rather than the impressiveness of the accomplishment, then humility has a chance.

So, today on her feast day, I ask for her intercession that God would help me accept the fact that I am weak and small. Rather than being concerned about how I stack-up compared to others, may I instead keep my eyes on Jesus so that his strength is manifest in my weakness.
Posted by Unknown at 2:15 PM

From the "Because *Everything* is Related to Chesterton" files: The Chestertons went to St. Teresa’s in Beaconsfield, the first church in England dedicated to her. The priest in charge of Chesterton's cause for canonization, Father Udris, was the parish priest there for a while. Seems like I recently heard a talk by him in which he drew strong connections between Thérèse of Lisieux and GKC… although at first glance one might wonder what the two had in common, besides Catholicism!

BTW, the next annual conf. of the American Chesterton Society (Oct, 2015, IIRC) will be in San Antonio! It sounds like fun… but I might be too Protestant. ;-)

Thérèse does have a very common-sense approach to the spiritual life that I can see would be attractive to Chesterton.