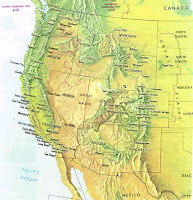 In the summer of 1977, my family piled into our van and took a two week road trip to California. It was a great, once in a life-time experience. We got to see many amazing things as a family, and we had a great time.

While we were on the trip, this movie Chuck had told me about came out, and it was a sensation. I couldn't believe what I was hearing on the news that people were lining up for hours to see a Science Fiction movie. Of course, the movie was "Star Wars," and while we were in a drug store in San Francisco, I picked up a copy of the book to see what this thing was about. When we got back to Texas, we stopped at Chuck's house in Lubbock. By then I had read the book, and he had already seen the movie twice. He immediately took us out to see the movie, and I was blown away.

Star Wars was not traditional Science Fiction, though. It didn't speculate about our future, but took place "a long time ago, in a galaxy far, far away." George Lucas even admitted that space travel and technology were just part of the setting for a classic hero's journey story. In other words, Lucas what not really very interested in Science Fiction, but just wanted to create an exciting, fun movie. This is why Star Wars had a much broader appeal than other Science Fiction like Star Trek. Although I was aware that Star Wars was not pure Science Fiction, I was so taken by the movie that I didn't care. This was the first movie I strongly cared about, and to my 14 year old mind, it was the best movie that had ever been made. (When "Annie Hall," a movie I had never even heard of, won the 1977 Academy Award for Best Picture, I thought, "What is wrong with these people?! Don't they get how great Star Wars is?") 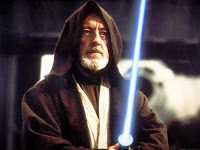 Another thing about Star Wars that was new to me was that in the midst of a technological setting with space ships, robots, aliens, and blasters, there was a mystical element: the Force. I did not know what to make of the Force. At first, it seemed to be like the psychic powers I had encountered in other Science Fiction, but it was different in that it had a moral element. There was a light side and a dark side to the Force. Also, it was not just a power of an individual, but it seemed to be a power outside of and beyond the individual that aided the individual who cooperated with it. One man, with the Force as his ally, could take on a huge technological power.

Looking back, I see Star Wars as having an important role in my spiritual journey. It opened my mind to the possibility that the scientific and spiritual worlds might not be incompatible. I considered the possibility that if there were something like the Force, then ancient religion might be a primitive attempt to understand human experience of this Force, but such thoughts did not immediate lead to an interest in religion. I had no evidence that any religious people I knew experienced anything like the Force. Instead, my interests took a different turn.
Posted by Greg Graham at 8:59 PM 3 comments: