Reflections on the Sunday Readings 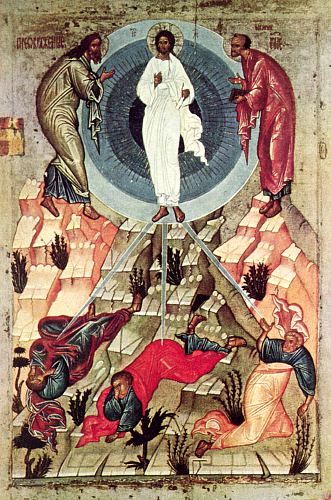 Here are some reflections on the Sunday readings for this week.


Have you ever felt like God was asking you to do more than was possible, or that he had put you in an impossible situation? In the first reading for today, God tests Abraham by asking him to sacrifice his only son. Sacrifice of children was a practice in some of the cultures around Abraham as a way of showing extreme devotion. Therefore, this command from God is not something completely strange for Abraham. However, Abraham has followed God for many years, and he knows that his God is not like the cruel gods to which the surrounding tribes sacrifice their children. Abraham knows that God is faithful to his covenant, the same covenant in which he promised that through Isaac, Abraham would have many descendants.

We see the faith of Abraham, not only because of his willingness to obey, but in the answer he gives to Isaac when he asks, “The fire and the wood are here, but where is the lamb for a burnt offering?” Abraham replies, “God himself will provide the lamb for a burnt offering, my son” (Gen 22:7-8). The writer of Hebrews says that Abraham “considered the fact that God is able to raise someone from the dead” (Heb 11:19), so he was not worried about losing his son.

God stops Abraham from killing Isaac and provides a ram for the sacrifice. God indeed provided, as Abraham said he would, but Abraham’s prediction has a greater fulfillment. St. Paul tells us in the second reading that God “did not spare his own Son but handed him over for us all.” (Rom 8:32). Therefore, when our Gospel reading shows Jesus on another mountain, we might wonder if a connection is to be made to the mountain in the first reading. In today’s Gospel reading, Mark tells us that Jesus conversed with Moses and Elijah, but in Luke’s version of the same story, he says that Moses and Elijah spoke to him “about his exodus, which he was to accomplish at Jerusalem.” In other words, they were speaking to Jesus about his crucifixion. It was on the cross that God makes the ultimate fulfillment of Abraham’s prophecy. Jesus is the lamb that God provides to take away the sins of the world.

On the transfiguration mountain, we do not see a mere man. His glory shows Peter, James, and John, as well as all of us, that He is more than an ordinary man. Therefore, when we see Jesus on a cross on the mountain of Calvary, we need to remember that no ordinary man is hanging there. We understand that Jesus is the God-man, and this has many implications for his crucifixion. One is that as God and man, Jesus is able to accomplish the salvation of the human race there on that cross. Another is that as God and man, Jesus is not defeated on the cross. The grave will not be able to hold onto him, and he will rise from the dead.

As we go through Lent, let us remember the transfiguration. There is a reality about Jesus that is usually hidden, but in the transfiguration, we get a glimpse. In the same way, the reality of the Church, the body of Christ, is ordinarily hidden. The grace that God bestows on us and the realities of the sacraments, especially Jesus’ presence in the Eucharist, are all hidden from our senses, but that does not make them any less real. Jesus showed Peter, James, and John this glimpse of who he really is in order to help them get through the trials that were ahead of them. We need to remember the transfiguration, and the other truths of our faith, as we face the trials that are in our lives, especially in this season of Lent. May we have the faith of Abraham and know that no matter what the circumstances look like, God will be true to his promises, and he will always provide what we need in this life, until he has brought us home with him in heaven.
Posted by Greg Graham at 10:35 PM No comments: 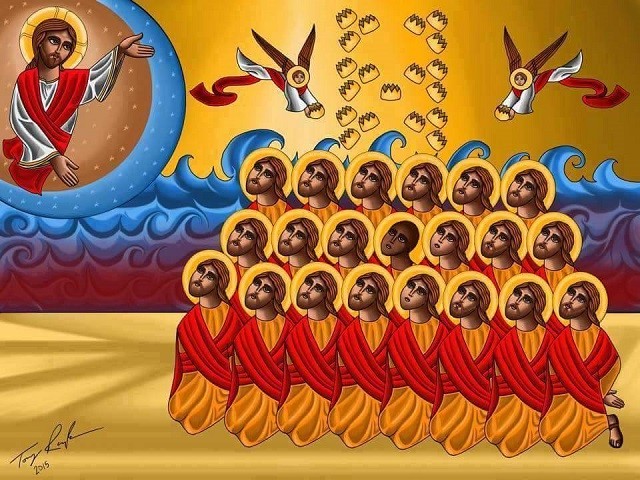 There were two topics that came up on my Twitter feed yesterday that caught my attention. The first was the Coptic Church recognized the martyrdom of the 21 Christians killed by ISIS, with several people posting the above icon. The second item was that Pope Francis declares Saint Gregory of Narek a Doctor of the Church. This Saint Gregory of Narek was an Armenian priest an monk who lived at the end of the 10th century, and is an important saint in the Armenian Apostolic Church, although he is also recognized as a saint in the Catholic Church. He is known for his poetry, some of which has been compiled in this nice website.

One thing that ties these two events together is that the Coptic Church and the Armenian Apostolic Church both separated from Rome after the Council of Chalcedon in 451 AD. What I find amazing is how similar these churches are to the Catholic Church, even though this division is so old. I attribute that to the mercy of God, who has maintained a level of unity of faith, even after formal unity was lost. This gives me hope that we will see full unity between our churches soon.

The other thing that ties these events together is that we are celebrating the Communion of the Saints. Those 21 Coptic martyrs are in heaven now, together with Saint Gregory of Narek and all of the other saints. Their arrival in heaven, however, has not cut them off from us. We may not see them now, but they are aware of us who are still on earth, and they are praying for us.
Posted by Greg Graham at 8:56 PM No comments: 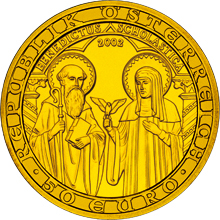 Today is the feast day of Saint Scholastica, twin sister of Saint Benedict, the father of western monasticism. The Office of Readings for today has a story about the two of them that I have loved ever since I first heard it, so I will post it for you today.

Scholastica, the sister of Saint Benedict, had been consecrated to God from her earliest years. She was accustomed to visiting her brother once a year. He would come down to meet her at a place on the monastery property, not far outside the gate.

One day she came as usual and her saintly brother went with some of his disciples; they spent the whole day praising God and talking of sacred things. As night fell they had supper together.

Their spiritual conversation went on and the hour grew late. The holy nun said to her brother: “Please do not leave me tonight; let us go on until morning talking about the delights of the spiritual life.” “Sister,” he replied, “what are you saying? I simply cannot stay outside my cell.”

When she heard her brother refuse her request, the holy woman joined her hands on the table, laid her head on them and began to pray. As she raised her head from the table, there were such brilliant flashes of lightning, such great peals of thunder and such a heavy downpour of rain that neither Benedict nor his brethren could stir across the threshold of the place where they had been seated. Sadly he began to complain: “May God forgive you, sister. What have you done?” “Well,” she answered, “I asked you and you would not listen; so I asked my God and he did listen. So now go off, if you can, leave me and return to your monastery.”

Reluctant as he was to stay of his own will, he remained against his will. So it came about that they stayed awake the whole night, engrossed in their conversation about the spiritual life.

It is not surprising that she was more effective than he, since as John says, God is love, it was absolutely right that she could do more, as she loved more.

Three days later, Benedict was in his cell. Looking up to the sky, he saw his sister’s soul leave her body in the form of a dove, and fly up to the secret places of heaven. Rejoicing in her great glory, he thanked almighty God with hymns and words of praise. He then sent his brethren to bring her body to the monastery and lay it in the tomb he had prepared for himself.

Their minds had always been united in God; their bodies were to share a common grave.

Posted by Greg Graham at 8:12 AM No comments: