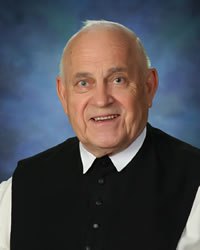 When I started working at Cistercian Preparatory School in October 2007, Fr. Matthew's office was next door to mine. He did not teach anymore, but he did not want to retire, so he helped supervise in the lunchroom and the library.

Fr. Matthew called me his "neighbor", and almost every morning he would open his door and greet me when he saw me walk past his window. A couple of years ago he began to need help with his supervision duties, and I became one of his helpers, which meant that I heard a lot of stories. From his stories, I was able to piece together a picture of his life, and I was thinking I would try to write it down here, but then I saw his obituary, which covers most of what I know. Therefore I will just say a few things and then include the obituary.

The obituary says that Fr. Matthew was expelled from school for being a Catholic "ringleader." The story he told me was that the students were required to attend a speech given by an important Communist. The speech was full of slander against Cardinal Mindszenty, the leader of the Catholic Church in Hungary, so he and some other students walked out of the speech. For that they were expelled and not allowed to graduate from any school, and thus would be blocked from attending a university. Fr. Matthew told me he didn't care because he wanted to go into the seminary.

When he would tell me about being in the army, Fr. Matthew often used the motto, modus vivendi, which means "way of living." What he meant by it was that he had to find a way to survive among those who were radically and dangerously opposed to his beliefs. The officer he worked for knew he had earlier wanted to be a priest, but did not hold that against him. This officer told him that he should stick with him and thus be protected. Since Fr. Matthew didn't care about advancing his career in the army, he didn't get involved in the political intrigue that was common there, and instead just tried to do his job well. He worked as a clerk, handling a lot of classified documents, and developed a reputation of being reliable and dependable.

One morning Fr. Matthew asked me if I knew what famous event happened 60 years ago that day. It was March 5, and I had no idea. He told me that when he was a child, his family was too poor to own a radio. However, when the Communists took over, everyone got a "box". It only had one knob on it, used for turning it on, and it only picked up one radio station: the official Communist station. That day, 60 years ago, he turned on the box and heard funeral music. He knew someone important had died - it was Joseph Stalin.

Born on February 19, 1929 in Hercegfalva (now Mezőfalva), Hungary as György Kovács, he lost his father as an infant, and was then brought up by his mother and stepfather, Mr. and Mrs. István Virágh. At the age of 11, at the initiative of the local pastor, he was sent to the Cistercian School in Baja, where he discerned and prepared to follow a vocation in the Cistercian Order.  After the Communist regime nationalized all Catholic schools, Fr. Matthew was expelled from the school together with other senior students, identified as Catholic “ringleaders,” and was not permitted to graduate from any school. He finished high school privately in the minor seminary of Győr. In August 1949, he entered the novitiate in the Cistercian Abbey of Zirc, experiencing the last ten months of the monastery’s existence before its suppression by the Communists. He took his first vows on June 22, 1950. After the suppression of the monastery, he hoped to continue his formation in the diocesan seminary of Székesfehérvár, but by decree of the Communist State, as a professed monk of Zirc he was rejected and was refused entrance to any institute of higher learning. The following five years he worked in factories, and then was drafted and served for more than two years in the Hungarian People’s Army. All along he persevered in his vocation, studying philosophy and theology in clandestine, private groups under the leadership of Fr. Lawrence ‘Sigmond, hoping that his call would eventually come to fruition.

After the defeat of the Hungarian Revolution of 1956, Fr. Lawrence, his acting major superior, suggested that he cross the poorly guarded Western border and emigrate to Austria. Before leaving, on November 30, 1956, Matthew was allowed to take his perpetual vows clandestinely. On December 3, he finally arrived to the Cistercian Abbey of Heiligenkreuz.

Fr. Matthew joined the other recent Cistercian refugees in Rome. In eight months he took exams and became eligible to be ordained a priest. He was ordained together with Fr. Pascal in the Abbey of Zwettl, Austria on July 21, 1957. While finishing his theological studies, he worked as chaplain in several Hungarian refugee camps in Austria and at the same time studied at the University of Graz.

On July 1, 1959 Fr. Matthew arrived to the newly constructed monastery of Dallas. From September 1959 until the summer of 1962 he lived in Ft. Worth, at the Mother House of the Sisters of Saint Mary of Namur (Our Lady of Victory), obtaining a Master’s degree in German Language and Literature at Texas Christian University.

From 1963 to 2006 Fr. Matthew taught German and Latin in the Cistercian Preparatory School. He served as assistant treasurer from 1963 to 1980. He regularly assisted in various pastoral assignments, including daily masses and weekly confessions at Holy Family Catholic church in Irving for many years. He often said the monthly Hungarian masses at the Cistercian Abbey.

By his untiring daily participation in the Divine Office, and his faithful and prompt priestly ministry, Fr. Matthew left behind a beautiful example of religious life. At every graduation Cistercian seniors recalled his cheerfulness, which turned the first year of Latin into a happy and memorable experience. He died unexpectedly but very peacefully in his sleep on July 12, 2013 at the age of 84.
Posted by Greg Graham at 5:15 PM No comments: