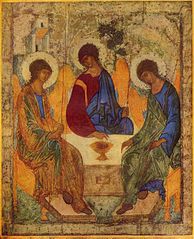 Note: This post contains a spoiler for The Island of Dr. Moreau. If you don't know the story, and want to read it and be surprised by what is going on, don't read this post.

A few nights ago, as I hovered between being awake and asleep, I was thinking about Rublev's icon of the Holy Trinity. The scene depitcted is taken from Genesis 18, which begins "And the Lord appeared to [Abraham] by the oaks of Mamre, as he sat at the door of his tent in the heat of the day. He lifted up his eyes and looked, and behold, three men stood in front of him." The text says that "the Lord" appeared to Abraham, but what Abraham saw were three men. Rublev follows the common interpretation of the Church Fathers that these three "men" are a manifestation of the Holy Trinity. Abraham and Sarah prepare a meal for the men, and they sit and eat.

In the icon, we see the Holy Trinity seated at a table. There is a lot of symbolism in the colors of the clothing, the tilt of the heads, and the position of the hands. I won't go into all of that, except to state the conclusion of interpreters of the icon is that there is that the viewer of the icon is invited to come to the table to dine with the Holy Trinity. God wants us to have communion with him and become "partakers of the divine nature" (2 Peter 1:4).

As I thought about this icon in my half-asleep state, I saw myself at the table, but I looked like one of the creatures from H.G. Wells' The Island of Dr. Moreau, which I had read recently. I had a brown, furry wolf-like face with sharp canine teeth and paws instead of hands, making it impossible for me to eat at the table with any degree of civility.

I woke up, and I was struck by the suitability of this image. In H.G. Wells' story, Dr. Moreau attempts to lift animals into the realm of humanity, trying to cross the chasm that separates humans from the other animals. He is unsuccessful in that he creates grotesque sub-humans that tend to revert back to their animal natures. God is also in the process of transformation by lifting human nature into the realm of the divine, and the chasm that separates humanity from divinity is far greater than that which separates us from the animals. In contrast to Dr. Moreau's cold, cruel experimentation, God's work is gentle and loving. And unlike Dr. Moreau, who lived apart from his creations, protected by a walled compound, God accomplishes his work by first becoming one of us, even though that leads to his death. However, the death of Christ removes the sin that separates us from God, and Jesus rises from the dead, becoming the first of a transformed humanity. Through faith in Christ, the grace of God comes to us through the sacraments, and we participate in that power that raised Jesus from the dead. That power transforms us into his image so that we can follow him to glory.

So what is the meaning of my beast-like appearance? The transformation is not yet complete in me. By God's grace, I am somewhere between my natural and fallen state, and what God ultimately intends for me to be. The process of transformation can seem long and difficult, and until it is complete, even at my best I am still awkward, clumsy, and marred by sin. But God is not disgusted by me. Rather, he lovingly and patiently continues working with me until he completes the work he has begun.

Why God Won't Go Away 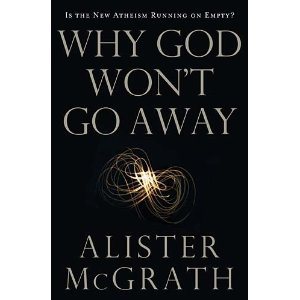 I just finished reading Why God Won't Go Away by Alister McGrath. I found the book a few weeks ago while visiting our local library branch. It was an interesting read, giving an overview of the "New Atheist" movement, especially their chief writers, Sam Harris, Richard Dawkins, Daniel Dennett, and Christopher Hitchens.

The book is short and easy to read. In addition to describing the New Atheist movement, it also points out its weaknesses, and makes the claim that at the time of writing, 2010, the movement was in decline. Although I think the book does a good job of pointing out the problems of the New Atheist, it never goes deep into any of the arguments. It's informative for someone who is already a believer, but it is not likely to be persuasive for an unbeliever.

Another issue I have with the book is its optimism. Even if the New Atheism is failing among intellectuals, I think it has had an impact on the greater culture at large, which may not examine the arguments too carefully. Through rhetoric and ridicule, the message is getting out that religion is irrational and dangerous.

So although McGrath is correct that the New Atheists will not eradicate religion, it's provided plenty of material to confuse people and provide excuses for those who want to reject God.
Posted by Greg Graham at 4:39 PM 3 comments: