The notion of primary and secondary causes is essential to understanding the role of God in creation in the context of our modern world. Although I had heard these terms before, it was from St. Thomas Aquinas that I got a clear picture of what they mean.

God is the primary cause of everything. This not only means that God caused things to exist at the beginning, but he continually causes their existence, and gives them the ability to do what they do. This idea appears in Scripture: "In him we live and move and have our being" (Acts 17:28, where Paul is actually quoting a pagan poet), and "in him [Christ] all things hold together" (Colossians 1:17).

All of the matter and energy in the universe is caused to exist by God. If God were to cease causing them, they would cease to exist. Particles of matter and energy have the ability to interact with each other, and so they act as secondary causes. These secondary causes act not only at the level of physics, but also at the chemical, biological, and human level. I might say something that causes someone to do something that they would not have otherwise done, for example.

Everything that is studied by modern science is at the level of secondary causes, and science has done a good job of describing how these secondary causes appear to interact. However, nothing that science has uncovered has affected the philosophical need for a primary cause, nor has it found anything to disprove it. The concept of a primary cause is metaphysical, and outside the bounds of modern natural science.
Posted by Unknown at 4:52 PM 1 comment:

Mistreatment of Women is a Human Problem

I have been reading articles and posts lately blaming religion, and specifically Abrahamic religion, for the mistreatment of women in history. I submit that although there is a problem of exploitation of women in our history, it is not a religious problem, but a human problem. Proof is that secularism has not removed the problem. I have heard items in the news recently that illustrate this. Warning, the articles I am linking are moderately explicit.

The first example is an article I found today called  "Gangbang Interviews"and "Bikini Shots": Silicon Valley’s Brogrammer Problem. The Silicon Valley technology culture is very secular, but that hasn't prevented it from falling into some very bad treatment of women. The second example concerns sex trafficking in China. I heard a story on the radio, so I did a search on the topic, and this article,  Gendercide and the Cultural Context of Sex Trafficking in China, was representative of what I heard on the radio. Although the Chinese has not succeeded in completely wiping out religion in their country, it is dominated by an atheistic regime.

While I'm not denying that there are religious people mistreating women, and that they will often try to use their religion to justify their actions, but I do not believe that Christianity, at least not Catholic Christianity, is the cause. Rather, Christ promoted the dignity of women in a Greco-Roman world that treated women like property. Churches which are faithful to Christ do the same.
Posted by Unknown at 7:02 PM No comments: 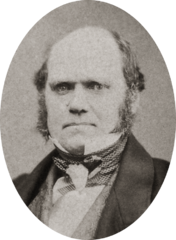 It's no secret that there are cultural conflicts in much of the world between religious and secular views. Although the conflict goes back at least a couple of centuries among intellectual minorities, in the last few decades it has become mainstream. Even most people of  general religious persuasion are affected by the secular world-view that is becoming dominant.

I think the doctrine of creation is central to this debate. If there is a God, and he made the universe and each of us, then the religious perspective is important. However, if there is no God, or God is defined as something less than the sovereign creator, then any religious perspectives are at best of secondary importance.

Belief in the doctrine of creation began to decline in the mid 19th century, with the publication of Charles Darwin's On the Origin of the Species being the watershed event. However, although Darwin's work is central to this decline, it is only one of many scientific theories and discoveries that changed our view of what the world is, and how it came to be the way it is.

Because this new way of looking at the universe came by means of scientific study rather than divine revelation, theology, or philosophy, it was easy for people to come to the conclusion that there must be some kind of conflict between science and religion or science and philosophy. The extreme view that is on the rise today is that science has either disproved the existence of God, or at least eliminated the need for God, the assumption being that God was something that humans made up in order to explain things they could not understand.

Although some religions have very specific teachings about the age of the Earth or the process of creation which are at odds with current scientific views, I don't see a conflict with the findings of science and the claims of Catholic Christianity. I have read and have spoken with priests and members of religious orders who are also scientists and science teachers who not only think that there is no conflict, but the believe that the findings of science harmonize so beautifully with the Catholic faith that the study of science is beneficial to the faith.

My plan is to write several posts as I think and read about this question. I certainly don't have all of the answers, so ideally there will be some discussion. I hope this exercise will be a learning experience for myself as well as an opportunity to share what I have learned with others.
Posted by Unknown at 3:47 PM 7 comments: 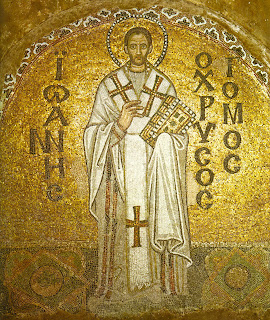 Today's reading from the Office of Readings in the Liturgy of the Hours is by St. John Chrysostom, who became Patriarch of Constantinople at the end of the fourth century, and is a Doctor of the Church. In this reading, he focuses on the blood and water that flowed from the side of Jesus when he was stabbed with a spear after he died on the cross.

Chrysostom says that the water and blood are the source of the sacraments of Baptism and the Eucharist, which are central to the formation of the Church. Therefore, the Church, who is the Bride of Christ, was born from the side of Christ at this event.

St. Paul calls Jesus the "New Adam", the first of a new humanity. Chrysostom builds on this idea and compares the birth of the Church from Jesus' side to the creation of Eve from the side of the first Adam. What is important to Chrysostom is not that Eve was literally formed from one of Adam's ribs, but that the story is prophetic of the New Adam and his Bride.

Here is an excerpt from today's reading:


“There flowed from his side water and blood.” Beloved, do not pass over this mystery without thought; it has yet another hidden meaning, which I will explain to you. I said that water and blood symbolised baptism and the holy Eucharist. From these two sacraments the Church is born: from baptism, “the cleansing water that gives rebirth and renewal through the Holy Spirit,” and from the holy Eucharist. Since the symbols of baptism and the Eucharist flowed from his side, it was from his side that Christ fashioned the Church, as he had fashioned Eve from the side of Adam Moses gives a hint of this when he tells the story of the first man and makes him exclaim: “Bone from my bones and flesh from my flesh!” As God then took a rib from Adam’s side to fashion a woman, so Christ has given us blood and water from his side to fashion the Church. God took the rib when Adam was in a deep sleep, and in the same way Christ gave us the blood and the water after his own death.

Do you understand, then, how Christ has united his bride to himself and what food he gives us all to eat? By one and the same food we are both brought into being and nourished. As a woman nourishes her child with her own blood and milk, so does Christ unceasingly nourish with his own blood those to whom he himself has given life.

The text for this quote is taken from Universalis.com, and the picture is from Wikipedia.
Posted by Unknown at 4:55 PM 1 comment:

What is the Liturgy of the Hours? 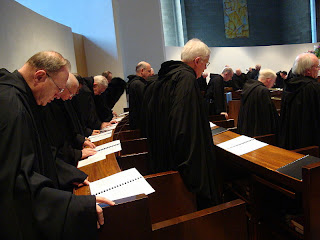 I have done some posts in the past quoting from The Liturgy of the Hours, and I plan on writing more posts like them, so I thought it would be good to have a post explaining what it is.

The Liturgy of the Hours is also called the Divine Office, and is rooted in the Jewish practice of praying the Psalms at various times of the day. The Apostles continued this practice, as is seen in the Acts of the Apostles. For example, "Now Peter and John were going up to the temple at the hour of prayer, the ninth hour" (Acts 3:1). By the time of the 6th century, a particular weekly schedule of night prayer along with prayers seven times during the day was established that included Psalms, hymns, and passages from the New Testament. This scheme continued into the 20th century until the Second Vatican Council. After the Council, a new simplified scheme was introduced that combined some of the hours, and introduced a new "Office of Readings", which includes extended Biblical readings along with selections from writings from throughout the history of the Church.

The Office of Readings contains many gems from the tradition of the Church, and I am often struck by their beauty and how they so perfectly express important truths of the faith. That's why I am compelled to share some of them in this blog. I hope they will be of some value to some of my readers.

In preparing this post, I read this page on the Liturgy of the Hours from the EWTN web site, and this article from Wikipedia. You can also see the form of the Divine Office using the Universalis web site. It has just about all of the texts, but due to copyright issues, some of them are not in the official translation.
Posted by Unknown at 3:48 PM No comments: